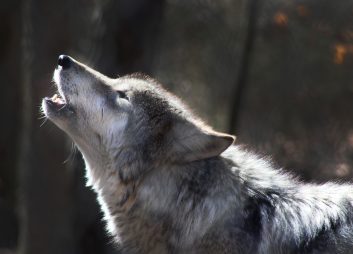 The month of January has an association with wolves. The Gaelic for January, Faoilleach, derives from faol-chu, meaning wolf, while the Saxon for January is Wulf-monath – Wolf Month. The festival of the Japanese wolf god, Ooguchi Magami, is held in January, whilst we also have the Wolf Moon this month. It’s understood one reason for the association is that in some areas of the world January is the time of year when food is scarcest so wolves are more likely to threaten human settlements. The other reason is that breeding season begins in January so wolves howl more often and more loudly to establish their territory.

As Wolf Month begins, I’m remembering the relevance of the wolf to homeopathy. Homeopaths use several ‘milk remedies’, and the milk of the wolf (Lac Lupinum) is one. Those who benefit from the homeopathic remedy derived from its milk often display the animal’s characteristics. Wolves are some of the most playful mammals (the males as well as females play a lot with their pups) and wolf milk people are often lively and playful. Other traits of the wolf are sociability and an affectionate nature, and they’re protective of their young. Likewise Lac Lupinum people are very warm, open-hearted and easy company. They show love and openness for their friends, protection towards children, and are often very sociable with a magnetic personality.

Time spent in easy company certainly sounds like the way to play the coming year; I hope 2019 pans out that way for you.